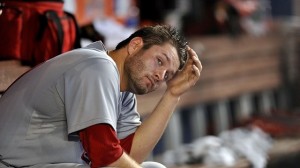 When I think of Lynn on the mound, I think about Joe Cocker’s classic tune, Have a Little Faith in Me. Every time he throws 30 pitches in an inning, it plays in my head. Every time a hitter fouls off continuous inner half fastballs, it plays in my head. Have a little faith in a man known for throwing primary fastballs towards the plate for 6-7 innings every 5 days. Lynn doesn’t wish to fool hitters and that’s why he’s a hard pitcher to watch. He takes the mound, gets the ball and changes speeds on the dial of his heater for a couple hours. He may mix in a curve or a change, but they are salad dressing on his chef salad assortment. He lives and dies by his four seam fastball and two seam cutter.

In 2015, it’s been a struggle for Lynn, especially in the second half. In his last 7 starts coming into today’s tumultuous match at Wrigley, Lynn’s ERA was 5.70 with 18 strikeouts and 17 walks in only 30 innings with a WHIP of 1.77. You can’t chalk that up to a lack of run support or who is catching Lynn behind the plate. That is a lack of effectiveness from a starting pitcher who turned a corner in 2014 with a brilliant second half ERA of 2.22 after experiencing setbacks in previous closing season grinds.

Friday, Lynn walked six in 3.1 innings against the Cubs, allowing 3 earned runs and 3 hits with 77 pitches thrown. 77 pitches for 9 outs. The Wrigley start epitomizes a rough bookend for the veteran righthander. When you look at his 2015 opening start at Wrigley(6 innings, 1 earned run, 87 pitches) and the September 18th start, it’s hard to not notice the stains on the window of his season.

Is something wrong medically with him? Is it the notorious blister on his pitching hand? Is it a groin injury? The ankle turn he dealt with in August? Hard to tell. His velocity doesn’t appear to be diminished but the performance just hasn’t been there. Is it fair to have faith in Lance Lynn, defend him, criticize him or outright bash him at this point?

For now, hold the bashing and the brick wall defense and be worried about this recent trend because time is running out. This is rough but can be turned around with a couple efficient starts. After Carlos Martinez suffered a rough patch, he bounced back. Can Lynn do that? Why not? This isn’t exactly Don Draper drinking stupor territory but it’s also just baseball related stumbles.

The six month grind can get a pitcher. After he exited the game, Lynn unleashed a verbal tirade on the home plate umpire for a zone he didn’t like. You just don’t see that from the man. He may shout, scream and show emotion on the pitching mound but rarely loses it on an umpire once he leaves the game. Today the game of baseball got to Lynn in a way fans rarely witness.

The better question is does this rough patch cost Lynn a postseason rotation spot? The Cardinals sport a historically great rotation that will be hard to trim down when October 6th hits. Do you keep Lance Lynn in a four man rotation and boot out someone else? If so, who do you take out? Martinez? That’s an electric arm to pin down. Jaime Garcia isn’t a reliever and shouldn’t be. John Lackey is arguably the most valuable starter in the group and Michael Wacha has looked like a stopper recently.

Where does Lynn fit in? This isn’t a time to bring up who was pro-Lynn and anti-Lynn back when or where they are now. This is about finding the best four man group to win a World Series win. There are many reasons to love Lance Lynn and I’ve written about it. However, it’s hard to not see the downward trend in his second half performance. What do you do with a struggling pitcher if he exits the season in a funk and you only need four guys in a playoff rotation?

Lynn has three starts remaining, barring any juggling of the rotation. He starts tonight against Cincinnati at home, at Pittsburgh and at Atlanta to finish the season. All three will be crucial in figuring out where his playoff status lies.

Love or hate Lance Lynn, it’s never easy watching the man pitch but it’s no time to give up on the pitcher.