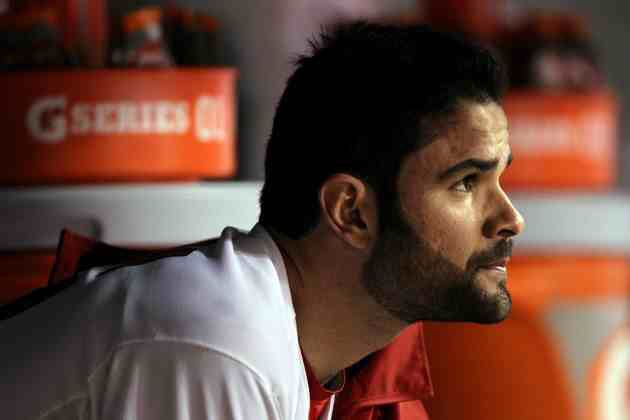 1. Perspective. With the loss, the Cardinals now only lead Cincinnati by 29.5 games in the NL Central division. Spoiler territory has its dangers but in the end this was an ugly loss that only cost the team a single game.

2. Lack of execution. The Cards had their chances against John Lamb, who walked 6 in his five innings but also struck out 6 batters. He matched his salt with pepper and kept the Cards at bay long enough for his team to pile on big innings.

3.  Attention Mike Matheny. Don’t ever bat three strikeout prone batters in a row. Mark Reynolds, Brandon Moss and Peter Bourjos came in with a combined 30% K rate, and the result Thursday night was 5 strikeouts in 9 at bats. No hits. A walk. Bad idea. Don’t do it again.

4. Where is Tommy Pham? The rookie couldn’t find the starting lineup again. With Bourjos and Jon Jay not hitting and Randal Grichuk incapable of throwing, the time to play Pham is now. He has some pop, can play defense and has speed.

5.  No ground was lost to Pittsburg. The Pirates can’t beat the Milwaukee Brewers. In the 12th inning, the Brewers got RBI singles from Logan Schafer and Luis Sardinas to sink the Bucs. Kyle Lohse got the save.

Extra innings analysis-Jaime Garcia is human. The Cards lost another game, continuing a rough week of play but the good thing is tonight is another opportunity to chop the magic number down. The loss was bad but the damage was minimal. The Pirates and Cubs are playing catch up and can’t afford to mess up this month.