Most young kids get on a rink and all they can think about is wanting to be the next Alexander Ovechkin or Sidney Crosby. The next NHL sensation. It’s all they think about. A few wouldn’t mind playing in the NHL and putting together a respected career. While it’s not as sexy as leading the league in goals or hoisting The Stanley Cup, a 14 year career in the NHL is something to be extremely proud of.  Bryce Salvador played 14 years in the NHL, splitting time between the St. Louis Blues and New Jersey Devils. Salvador is calling it quits. 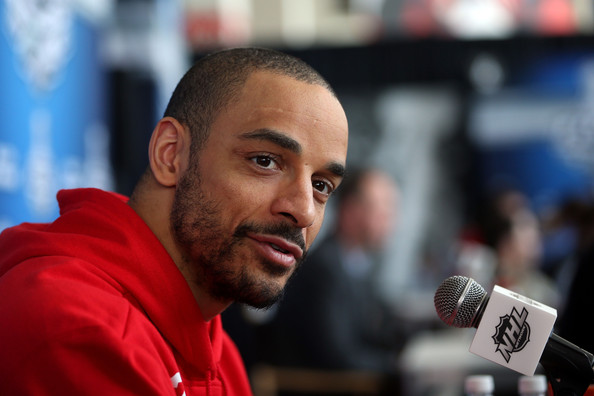 To Blues fans, he is the young kid who came to St. Louis in 2000 and played seven seasons with the Blues. He never put up gaudy point totals or was a perennial All Star, but he was a durable tough and solid defenseman for a playoff team. How can you forget Salvador’s game winning goal against San Jose in the playoffs in 2001? Many will know who Salvador was traded for(Cam Janssen) instead of the stout seasons he put in guarding the blue line. He was understated and did his job well. Not bad for a kid who was selected in the 138th spot in the sixth round and told by NHL scouts he would never play a single game in the league.

To Devils fans, he was the bullet headed lefty brick wall who solidified their blue line for the final seven years of his career, even after enduring a terrible puck shot to the face that almost ended his career. As Salvador revealed today in his heart pouring retirement blog for The Players Tribune(a website dedicated to providing players with a voice) the road back wasn’t an easy one. His issue were rooted in his vestibular system. Basically, his eyes weren’t working together anymore and were causing him to be constantly dizzy, nauseous and out of it. The shot had knocked his system out of wack. After a recovery that took several months and simple child like activities like spinning in a chair, Salvador came back in 2012, playing all 82 games. He made sure that he went out his way. The lights getting turned off when he said so.

To me, he will always be the quiet yet cool and polite neighbor. I met Salvador during his playing days with the Blues. He lived in a condo in Brentwood Forest, a suburban community in St. Louis county, next door to me. There were instances when fellow players like Jamal Mayers and Jamie McClennan knocked on my door instead of his. Salvador didn’t talk much but I did get to talk hockey with him after a couple games. One time, he came home after a game with a black eye and I had to commend him on the fight he won. He came home after the San Jose goal and I talked to him about it. It was cool living next to a hockey player. While I never got a 1 on 1 lesson like you would see in the movies, I couldn’t complain.

Salvador won’t get an extended clip reel on Sportscenter or be remembered for scoring a ton of goals(24 goals in 746 games). He will be remembered for hard work, defiance and playing the toughest position in hockey quite well for two teams and 14 seasons. He played in 74 playoff games and will be remembered for his 2011-12 postseason where he scored 4 goals and assisted on 10 others. When it comes to the little things forgotten by most NHL fans, Salvador leads the league in those. The gritty aspects that don’t fit into a website and must be seen in person in order to appreciate.

Take a moment and read Salvador’s career ending blog. It’s got detail, hope, fight, and all the power you would expect from a guy who just wouldn’t quit. He’s an embodiment of endurance that can’t be forgotten among young players, which is why Salvador’s post career will involve working with youth hockey leagues in New Jersey. He’s a testament to never believing in doubt and always placing your money on sweat equity. The next time your son gets told he isn’t good enough at hockey practice or at a tryout, just tell them about Bryce Salvador.