Long live the unfiltered action film designed just for the junkies of the genre. I grew up on Stallone, Arnold and Van Damme policing my cinematic streets. I was 17 years old when Keanu Reeves starred in the Matrix, and the rumor is true. That film changed the way movie fans looked at and critiqued action films. Reeves and his stunt double from the Matrix trilogy, Chad Stahelski, have come together to make John Wick, a furiously fun action film that qualifies as the best knock em sock em exercise I have seen in 2014 and possibly the past few years. Directed with a reckless abandon and a need to resist the urge to be realistic, John Wick’s tale is simple. Wick is a retired hitman who is living peacefully away from a world that once knew him as being the most deadly killer around. When a group of thugs(morons) come into his life and take something very dear to him, he makes a comeback. That’s it. 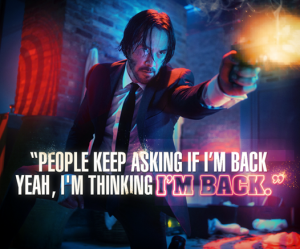 “John Wick isn’t the boogeyman. He is the man you send to kill the fucking boogeyman.”

Here are 10 reasons why you should see John Wick in theaters.

10) The film is 97 minutes long. A lean, mean and completely electrifying experience that doesn’t ask for too much of your time and doesn’t make you check your phone once. It’s like Wick himself. It gets to the point rather quickly and keeps moving like one of his bullets do as they are fired from his Smith and Weston handgun. This thing has one thing on its mind and that’s kicking ass. Long speeches and boring love stories have no place in this film except if it is a flashback.

9) The film carries a sense of humor. The actors seem to be winking at the audience the entire time. A way of saying, “We know this is mindless action but soak it up anyway because it will never look this good again”. The actors didn’t sign on here to get a SAG award. They wanted to have fun. You should too.

8) The cast is perfectly assembled. Every role and every line. Ian McShane as the governor(in theory) of Hitman killer town. He doesn’t waste dialogue. Anything that comes from his mouth has power behind it. Willem Dafoe and John Leguizamo are great here in a handful of scenes and little dialogue. This movie has one of the best bad guys ever in Michael Nyquist. He combines different flavors into one of the most original bad guys ever seen on screen. He respects Wick, a man he has feared his entire life. He knows what he can do. Nyquist adds humor and chilling physicality to his portrayal, never losing grip of the fact that this is an action film designed to devoured like a juicy steak and not held up on a pedestal. He is brilliant in a role that others could have overplayed or squandered. Adrianne Palicki shows just how much she has grown up from horror flick heroine to genuine bad ass actress to watch. He doesn’t just play the role. She shows us shades of a younger Angelina Jolie with a gun in her hand. One particular hotel room scene will remind you of Mr. and Mrs. Smith. Two veterans of The Wire, Lance Reddick and Clarke Peters, have small fine roles here. Dean Winters, a face you notice from All State Commercials, puts a funny spin on the henchman role. The cast is full of life here and doesn’t have to stretch their talents one bit.

7) The directors, Stahelski and Brian Leitch, have worked in the world of stunts and been around the coordinator arena for years so they know how to frame and execute a fight sequence and action scene. You don’t get the lousy jump cuts with the meth addict camera movements and the close up shots of the actor’s face mixed with far off shots. You get a realistic hand to hand combat style fused with a form of ballet that can be associated with any brand of martial arts. When two actors go at it, you can be sure it’s two guys fighting and grappling instead of wondering how much editing had to be done to make it look good. The filmmakers are old school artists and give actions fans what they want instead of the same old garbage. It’s far fetched but easy to devour and admire. Unless you can burn doughnuts in a parking lot driving a Dodge Charger while shooting bad guys, seeing this movie is the next best thing. The ideas that sprung from the creators heads here is wickedly enjoyable.

6) The film is gorgeously shot by Jonathan Sela. The cinematographer goes old school and gives us plenty of car chases with muscle cars, gun battles in nightclubs and fight scenes in the rain. He has done solid work in A Good Day To Die Hard and Law Abiding Citizen, but here his wild side seems to be unleashed and it elevates the film.

5) The film’s dramatic points don’t require a lot of dialogue and thrive on facial expressions and short bursts of emotion. The course here is action lovers delight, but small instances of drama do sneak in and they are NOT overplayed or melodramatic.

4) Tyler Bates’ score is perfect. A blend of loud guitars, drums, and dance music that doesn’t overwhelm but simply knows the playground it is located in. When you want in your face slam bang sound, Bates is the composer you call. He must make music while he smashes dry wall with aluminum bats.  It’s intense yet fitting.

3) The timing is perfect. The awards season is just about to launch and Wick is your last whiff of blood soaked leaves from the guilty pleasure season. Soak it up before the movies pick up the heavyweight and march through December. Wick is light on its feet and easy to digest.

2) Derek Kolstad’s script is a blend of humor, tough guy talk and infectious. There are at least 10 one liners worth remembering(one of them is listed before the review) when the credits roll. This movie is a wet dream for people needing an escape from a dull reality.

1) Keanu Reeves was born to play Wick. When The Matrix finished up, Jada Pinkett Smith and other cast members said Reeves had received enough training to be bad ass for life. Reeves has kept up his training and it shows in this film. He does the majority of his own stunts and that involves a mixture of several martial arts. This is what he should be doing. Action hero special. Do what fans know you for. Point Break, Speed, and The Matrix characters have nothing on John Wick and Reeves’ work is convincing and crowd pleasing. I have always respected the actor for doing he wanted to do and not what he was told. He turned down the Speed sequel and resisted a few dozen other action trilogies after the Matrix blew up theaters. He plotted his own course and that included a few romantic dramas and comedies where he stood out for the wrong reasons but for the most part, he drew his own map. There’s respect in that. Here, he is in his comfort zone and has never looked better. At 50 years of age, Reeves could settle in just fine with this genre again. He’s still got it. Older age has also shown a new found ability for Reeves to show more emotion and not look awkward doing it. There are a couple scenes in the film that require a little reach for the actor and he is very good. Older age can be kind to a handful of actors who use it right.

John Wick is a great film. Sure, it’s just an action film tossed into a crowded October month but it was one that I enjoyed immensely. I felt like seeing it again less than 24 hours after Tuesday’s advance screening. It’s 97 minutes well spent and has you walking out of the theater a little taller than when you went in. You think to yourself, man I wish I could do that spin and kick move like he did. There is an art to great action flicks and Wick achieves that here.

One Reply to “10 Reasons To See John Wick”