The Leftovers is a modern take on the Twilight Zone with the curve ball spin put on it by the creator of Lost. It’s odd and intriguing at the same time, and your eyes can’t be taken away from the television screen. Like Banshee, it feels like cinematic television. The proceedings are beyond odd and create an uneasy feeling.

Several scenes involve zero music or a slow creeping painful violin being played. Characters give damaged a whole new identity and are unpredictable. There are no good or bad people, just lost souls being washed up on an island not fit for human interaction.

Novelist Tom Perrotta wrote the book for which the series is based on and the Lost creator, Damon Lindelof, took it and ran it over to director Peter Berg, who then walked into the office of HBO with an idea for TV addiction. All three minds put together the pilot and help produce the show about a modern world that suffered the most outrageous form of Natural Selection. The basic story line here is 2 percent of the population went missing, and the show picks up the events of a small Northeastern town three years later. Babies went missing. Mothers and fathers. Friends. As one guy puts it, “an asshole who nobody will miss”. All kinds of people, attached or aloof. There’s  no real explanation other than the fact that somebody from above decided to blindly trim the fat of the world we live in. The creator and storytellers wisely maintain the focus of the show on the aftermath and not what caused the disappearing act. Damon already wandered into trippy science fiction mania with the last 3 seasons of Lost.  Everything about the show stays far away from the norm and what you would expect.

There’s a cult called The Guilty Remnant, a group of wordless people who wear all white, smoke enough cigarettes that Don Draper may even take a bow and generally stalk anyone who hasn’t joined or needs to join the club. A priest can’t fill his church because after such an otherworldly event, a need to worship a higher power doesn’t exist. A mysterious woman carries a gun in her purse and has her car and house full of motherly artifacts but there are no kids in her home. Enter Justin Theroux’s guilt stricken fucked up beyond belief town sheriff and you have your moral center. He has no clue how to keep the puzzle pieces of the town together and has enough issues getting himself together for reasons that are explained in the first three hours of the series. His kids are true rebels, the daughter spying on strangers and coming within inches of teenage wastelands while the son has joined the services of an unorthodox sex maniac/spiritual healer named Wayne.

Each episode slowly traces down everyone’s storyline and how the event brought them to this point. The scenes are patient and the dialogue is crisp. When someone curses, the situation calls for it and the explosions of rage feel like a hot cup of coffee being thrown across a room. The oddity of the circumstances are frequently updated. People are stoned in a street by people they don’t know. Dogs are shot but the characters aren’t wrong for doing it. “We’re Still Here” is the tag line and it fits the narrative like a tee.

The Leftovers is about a town dealing with immeasurable loss but the show wisely paints a picture that mirrors our own world and the struggles we deal with every day. Identity. Human loss. Ambitions. Consequences. Action. More importantly, the unknown. Instead of dwelling on the cause of the event, the people are stuck trying to make sense of the cards left in their lap at a spacious poker table. Imagine if you woke up and the woman you loved for 10 years was gone. No explanation. Imagine losing your parents at the age of 5 but not to a car accident or addiction but to a weird phenomenon. The Leftovers is hypnotic and addicting because it uses an odd premise to tap into real inner demons that people struggle with.

It is unlike anything else on television. Other shows only hint at or peek into the room of the themes expressed here. I am six hours 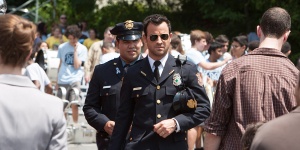 into a 10 hour season and the last four are going to fly by and I am going to be left wondering what’s next…just like the characters on the show. What is going to happen tomorrow? Will I be okay and where will I be? Theroux gives a freakishly good performance as the badge without purpose. You will wonder where the screenwriter(he helped pen two Iron Man films) and part time actor has been all your life. He looks broken on this show.  He plays the part like a pair of electrical wires being twisted together in hot water. Amy Brenneman does a lot with a little as a member of the Remnant. Christopher Eccleston, Liv Tyler, Carrie Coon, and Ann Dowd all get their moments to shine. While Theroux gets the poster love and the center spot of the story, the show takes on more of an ensemble mobility and it fits the story.

Sometimes, television shows have to challenge you in order to be worth your time. The Leftovers does that every single hour. Nothing is wasted here and the creators aren’t going to risk losing your attention. If it’s showing a hurting woman pay another person to shoot her in the chest with a bulletproof vest on or seeing a police chief slowly lose his mind over the course of an hour, this show never reveals its hand. You never know what is coming next and that is why a second season will be in order. The possibilities are endless. Unless you don’t mind losing hours of your time to numbing reality shows, take a look in the mirror by watching Leftovers. It takes original to a whole new level.