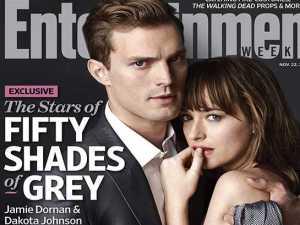 Ladies, eat your damn heart out! The Fifty Shades of Grey trailer is here and only gives a hint of the freaky naughty activity that will going on inside this film. Husbands and boyfriends across the world, think of this as a field trip without the name tags. You will accompany your wife to the film, and for once, won’t be subjected to boring melodrama that exists in the standard romantic dramas. This isn’t Nicholas Sparks. This is Real Sex Meets Pretty Woman with extra nudity. Let me run over the plot very quickly.

Innocent young bookworm Annabelle Steele(Dakota Johnson) meets Christian Grey(Jamie Dornan) and before you can check your watch, an attraction is built and manifested between the two people. She looks into those dreamy eyes and has no idea a certain brand of freak lies behind them. They have lots of sex. Talk a bit. Have more sex. Parents and siblings come into play. They probably have more sex after that. There is no distraction. If director Sam Taylor Johnson is smart she will stick to the sex and don’t disappoint in that area. I don’t mean to sound crude, but fans of the book didn’t read this thing for the intimate lovely fairy tale. They escaped to it for the erotic nature of the content. Anybody can write a boring sex novel about a playboy who toys around with a sweet young girl but very few can turn this story into something that sells 100 MILLION COPIES IN STORES!

Dornan and Johnson are relatively new and will be good for the roles because all you will associate them with is Annabelle and Christian. There is no need for Henry Cavill because he is superman. There is no need for Emilia Clarke because she is Queen of Dragons. In order to fully digest this wicked sex drama, all bets must be off once you enter the theater.

Expectations for this film have to be modest. Fans of the book must know that filmmakers can only go so far before they abandon the casual moviegoer. Money must be made if the rest of the series is to see the light of day at the cinema so don’t be disappointed if a few anal sex scenes and extreme parts of the book are left up to the imagination. I do see a hard R rating coming on here but nothing more than that. Fans of the book probably wished the film was made in Europe by an indie filmmaker who could go all out and show everything. That is not the case.

Fifty Shades isn’t an easy film to make because the cast and crew must first establish how far they will go before they alienate their target audience, which are any females currently breathing on this planet. The men will be there. Trust me there. As I noted, this is a fantasy to them. The romantic drama without the overloaded tears and dialogue. The women will make this movie run so I hope the movie people didn’t mess this up.

My prediction is this film makes an insane amount of money. There aren’t too many films like Fifty Shades of Grey. Usually, these books remain on paper. This is the exception.

I will be there with my wife. She read the books(and I nearly learned yoga as a result, if you catch my drift). She has expectations. Right away, she will look at me and shake her head like they messed it up. Then, the movie will play and everything will be under the covers. 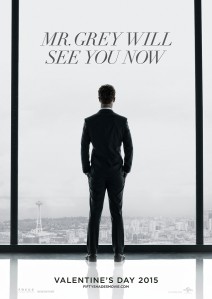