That was easily the best show in years. Sure, you didn’t have Hugh Jackman dancing around the stage or James Franco looking stoned throughout his hosting duties, 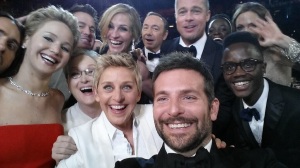 but you had a nice pace, a great host and a crowd of performers that loosened up as the telecast went on. There aren’t many hosts that can get Meryl Streep to shake her tail feather at Pharrell Williams as he dances out by the seats during his musical performance. There hasn’t been a host that gets pizza delivered to a starving audience who have jammed themselves into tight fitting dresses for the allure of a camera. Other hosts won’t break Twitter with a selfie shot including at least 6 Oscar winning actors. I am talking about Ellen DeGeneres and her fabulous hosting work last night at the Kodiak Theater.  Let’s talk about that and more here.

That’s it. Helluva show. I probably forgot something but I can come back later and throw it in during a future post. Last night’s show was fun, refreshing, fast paced and worth the time and the live tweets. Have a good day folks!