Find the time and give this show a set of eyes and ears because it’s primal rage entertainment and truly badass. Banshee season 2 premieres on January 10th. This is my third write up on it.  Read up.  This is my 300th post on WordPress, and it couldn’t come about a better subject.   I posted this piece a week ago on Film-Addict and it’s already got over 500 hits.  If you need a show to watch this month, check out Banshee.  Here it is. 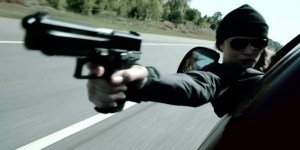 I was a fan of Banshee long before it graced large billboards in California and New York and before it crawled up on people’s top 10 list of TV shows of 2013.  When it premiered in January, no one had any clue what to think would come of this collaboration from the minds behind True Blood and House.

A year later, more than a handful of people know that Executive Producer Alan Ball and Creator/Executive Producer/Director Greg Yaitanes have crafted a genuine thrill ride of a television series, and one that could run for a long time on Cinemax if they know what good television is.

From the minute I watched the first episode of this wildly addictive show, I knew something special was brewing and that the entire world (not just entertainment fans) needed to be told about it. This is my third Banshee spotlight piece.  There is a pretty clear fascination going on here.  Let me break it down for you why it is so good and why you should donate 10 hours to its story right away.

This show doesn’t need awards to vindicate its greatness.  This isn’t 30 Rock or The Good Wife.  It breeds fanaticism and a devout cult following of fans straight from its skill at hooking viewers to a network without a big television series background and a story that is easy to digest yet impossible to ignore.  There isn’t another show on TV that I have spent re watching this past summer, fall and winter more than Banshee.  It isn’t a series that weighs you down with plot twists and a long list of complicated characters.  It is smooth digestible chaos.

You have a man who gets out of prison, goes to this small town in Pennsylvania because something or someone is there that he wants.   Without it, he is incomplete.  Through a series of events, this man becomes the sheriff of this small town, Banshee.  His name is Lucas Hood.   He finds a woman from his past living under disguise there.  He quickly pisses off local Amish gangsters and lures in mysterious beautiful women to his bed.   He befriends a local bartender who used to box and has a few secrets of his own.  He has a long trusted sidekick telling him to get out of dodge. Lucas isn’t’t going anywhere and we are thankful for that.

If people made sane logical decisions on Banshee, the entertainment value would drop in a heartbeat.   In Yaitanes and writer Jonathon Trooper’s world, there are tons of secrets and mystery but that just makes for years of energetically deep storytelling.  Their writing fuels the actors and actresses who bring this hypnotic blend of crazy to life.

Antony Starr’s soulful and brutal Lucas is the rock at the center of the show and the previously unknown New Zealand actor surprises you with his depth and emotional storage of feeling and resolve.   Ivana Milecevic’s(learn that name and scream it) dual faces of sexy ex con Ana and the new wife and mother Ana show Ivana’s ability to be a romantic and a physical force to reckon with.  Need proof, watch the video below of her epic fight with Christos Vasilopoulos’s Olek from Season 1.

Ulrich Thomsen’s Kai Procter, a man who looks like a villain on the surface but carries as much pain around as anyone.  Hoon Lee’s comedic and assured work as Job, the brain behind Lucas’ madness.  Frankie Faisen’s Sugar, the old puncher feeling new blood stream through his veins with Lucas in town.  Trieste Kelly Dunn’s fierce cop, seeing her past and future collide with deadly force.  Demetrius Grosse’s larger than life officer sharing some hidden abilities and power of his own.  Rus Blackwell’s conflicted lawyer, trying to maintain his marriage, his thirst for justice and his sanity at the same time with new revelations walking through his door.

Lili Simmons’ Rebecca, torn between her past and her uncertain future as an Amish lady with a wild side.  Ryann Shane’s young woman, unaware that her father could be this sheriff who keeps showing up in her life.  Matt Servitto’s seasoned lawman dealing with this guy who is causing a tornado of change in an already unstable town.  Matthew Rauch’s deadly henchman for Procter.  I could go on but some things are better left discovering.   Let’s just say the incoming presence of Lucas throws the entire town for a loop, in good, bad and ugly ways.

The characters on Banshee are comic book fueled creations with a real heart and soul that don’t fall on the clean cut sides of good or bad.  There is only one man who could create this kind of madness and that man is Yaitanes, who has directed a handful of the episodes, executive produced the show and put his neck on the line for the show.  Trooper’s dialogue and stories hit you over the head like a blunt instrument.

The people on this show are a special breed of deadly and we are privy to their actions on a weekly basis.  Banshee is entertainment at its finest.   Full of bad intentions and an ambition to top one ridiculously over the top scene with something even more outrageous.  Banshee doesn’t need your sympathy but demands your attention.

Now is the time to jump in.  Catch up before the second season begins.  Grab a blanket, a bottle of whiskey, a knife and cozy up on the couch for a night full of anti-heroic actions, visceral action, red hot sex, violent tendencies and a cinematic blend of television that is so rare these days.  You are either in or you are out.  Put down the smart phone, kindle, book and tell the spouse to shoot up.

Pay attention to this show.  There is a quiet emotional storm of drama streaming right beneath the bloody action and nudity.  There is more than meets the eye at all times.

The second season of Banshee starts on January 10th, 2014.  I own the Blu Ray/DVD and would invite anyone to come watch it with me.  The first season is on demand via U-Verse and Charter.  It’s available via Max Go.  Go to a friend’s house and watch it.  Politely ask a stranger if they can lend you their television for the evening.  Find the time and give this show a set of eyes and ears because it’s primal rage entertainment and truly badass. 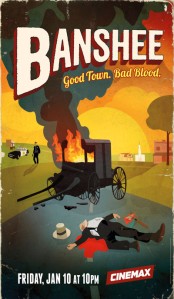 -Dan Buffa is the co-creator, administrator and writer for the movie website, film-addict.com. He also writes for the local blog United Cardinal Bloggers in addition to Arch City Sports and also writes for his personal blog, http://www.doseofbuffa.com.   He is a STL born and raised writer with a need to inform and the ability to pound out 1,000-1,500 word pieces with ease.  When he isn’t writing or drinking coffee, he is spending time with his wife and son in South City.  Follow him at @buffa82 on Twitter and reach him for thoughts, comments and general feedback at buffa82@gmail.com.