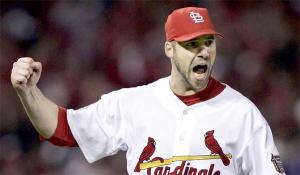 For some players, the game of baseball requires a heightened sense of intensity.   While others merely play the game as well as they can and do it hard every day, they don’t come close to the ferocity of Chris Carpenter, who I have had the pleasure of watching drape his brooding figure in Cardinal Red since 2004.   His story is truly authentic and special because he was deemed damaged goods in Toronto after 6 seasons of disappointment and he quickly flipped the switch in his first year here.  A shoulder surgery tragedy walking into Busch Stadium, Carpenter leaves his career in the same place as one of the best pitchers in the history of the franchise.   That remarkable run came to an end on Wednesday, when Cardinals General Manager John Mozelaik officially announced that Carpenter was retiring.

A quiet dignified exit for one of the Cards greats is appropriate.   Like a gruff old cowboy, Carp prefers to just get on his old horse and quietly ride out of town without a clear cut goodbye.   His career is similar to another former Cardinal, Jim Edmonds, in that both players enjoyed dominant seasons in patches but probably lack the overall numbers to stand out to the stat monsters standing at the doors of the Hall of Fame.  However, as I’ve said many times, I will take the player who was dominant for a shorter period of time than players who were simply good over a longer period.  That’s just me.  Take 2004, 2005, 2006, 2009, 2010 and 2011 of Carpenter and match them against other sure fire pitching Hall of Fame likely arms.  Go ahead and do it.  Two separate three year periods.

Carpenter’s greatness stretched farther than stats and goes into the intangibles and complexities of the game that many analysts miss.   He was a great teammate because he demanded his fellow players follow his work ethic and cut the shit.   He had no time for excuses and helped nurture Adam Wainwright into his successor.    He was blunt with the media and as tough as they come.  When he couldn’t contribute with his arm, he lent his mind and expertise to the manager and his teammates in 2007, 2008 and 2013.   When his body didn’t cooperate, Carpenter just hit the rehab highway even harder.  How many pitchers extend their career by having a piece of their rib inserted around their clavicle/neck area?   Carpenter did that.   He tore his triceps.  He had several shoulder surgeries.  He underwent Tommy John Surgery and missed nearly 2 seasons.  He just wouldn’t go away.

Take Carpenter away and The Cardinals probably don’t win the 2006 and 2011 World Series titles.   In 2006, he started 5 games, won 3 of them and compiled a 2.78 ERA.  In 2011, he was superhuman.  After dominating opposing hitters in September to literally carry his team to a last minute playoff berth, Carpenter went berserk in the playoffs.  He was 4-0 and while his ERA was higher(3.25), no one in baseball will ever forget his Game 5 clash in the NLDS with fellow ace and close friend, Roy Halladay.   Clinging to a 1-0 lead, Carpenter shut down the Phillies in their own park and when it was all said and done, he unleashed a primal scream that may have shaken the Rocky statue.  In the World Series, he made the famous dive for first base in Game 1 against the Rangers.  He went out on 3 days of rest to pitch Game 7 and delivered a quality start to help the Cards clinch their 11th title.  He was 10-4 with a 3.00 ERA  lifetime in the playoffs. Carpenter was all guts and glory in his prime.

He was ferocious on the mound.   He once made Starlin Castro and Hanley Rameriz cry a little during a game.   He screamed at opposing hitters from the mound, ripped himself apart at times and carried a general disdain for his right arm when it wasn’t throwing pitches where he intended them to go.  Carpenter was old school and truly one of a kind.  Whatever his body took away from him, he gave back in attitude, confidence and sheer menace.  His type of competitive intensity comes along maybe once a decade.

I watched him pitch for 2 seasons while I worked the final 2 years of the Manual Scoreboard at the original Busch Stadium.  He is still the best pitcher I have ever seen pitch live.  He wasn’t like the majority of pitchers who got the ball back from the catcher between pitches and seemed to look at it like a Rubik’s cube.  He got it and threw it.  I liked that about him.  Why wait an extra 5 seconds if you know what the heck you are doing?   Carpenter was all business and didn’t let feelings get involved.  I will miss watching him pitch.  I will miss his slow methodical walk from the mound after a decent if not great inning.  I will miss his double fist pump after a huge out.   I will miss him making hitters sweat because they weren’t sure if Carp was simply doing his job or holding a gladiator like grudge.    There aren’t many pitchers who finish with 144 wins and hold a place in so many people’s minds.

I hope Carp takes a little time off and resets his clock to prepare for a long coaching career.   I think he belongs in the dugout with the players more so than the office with the suits.  He needs to stay close to the stink of the game, the intensity streaming inside him, and become a full time mentor to younger players.   He will teach young pitchers how Cardinals are supposed to treat the game and themselves.  He will help weaker minds with the mental grind.  When someone gets hurt, he can tell them a lot of worthy stories about staying positive.  Chris Carpenter has a lot to offer and I don’t think he will be able to stay away for too long.  He is like Brett Farve.  He has little time for a broadcasting job.  He doesn’t want the bright lights flashed on him while sitting next to Pat Parris or Orel Hersisher.  He wants a half full bag of sunflower seeds to tuck in his back pocket and a shaved head to lurk under his tightly wound wool cap.   Chris Carpenter isn’t done with baseball yet.  He is simply done pitching.

This is truly the end of an era and a bittersweet moment in Cardinals history.  All good things do eventually come to an end.  Now is the time to revisit his greatest moments while he reloads the body and mind before his coaching career takes off.

Also, there are perks to knowing someone inside the organization.  On the day his retirement was announced, I got an email from the Cardinals about a request I made to my friend inside.  A signed Carpenter 2011 World Series baseball arrived today.   It will become my proudest Cardinal possession instantly.

Thanks for reading this,