I am fresh out of a job interview and a screening of Captain Phillips(excellent, review to come) but I will try to hit everything I can in the following clips.  Lots of action and thoughts flying around the social media waves today.  Here we go. 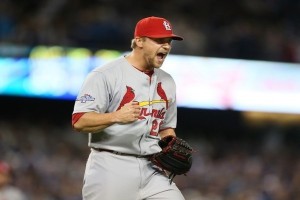 *Lance Lynn did as well as we could possibly ask for last night.  He bent but he didn’t break.   No blowup with one bad inning that brought in 2 runs but mostly solid over 5.1 innings with a few strikeouts.  I prefer to see Lynn out of the bullpen these days but apparently Miller is at an inning wall and saw his fastball command linger in September(his numbers go against that theory).  Lynn didn’t lay down explosives in the field last night.  He did alright and laid down a perfect bunt to boot.  Something Lynn has on Joe Kelly is the ability to bunt correctly.
*Jason Motte is your future closer.  With no offense to Trevor “Super Smoke Stack Special” Rosenthal, let’s not forget what Motte did the past 2 seasons.  After assuming the closer role towards the latter part of 2011, Motte was shutdown brilliant.  He was great in the World Series run and was tied for the league lead in saves in 2012.  He shut down Bryce Harper in the NLDS and was good in the NLCS before our whole team imploded.  To say he is trade bait or doesn’t need to come back or is too costly is premature.  The Cards have good problems with their pitching depth.   Motte won’t be back until May and even then he will need time to get right again and build up his innings.   He will be your setup man until the All Star Break and if he is good to go, he assumes the closer role with Rosenthal moving back to the 8th inning.  You are paying him to close and when his contract is up, this avenue can be examined further.  It’s not like Motte sucked and was banished.  He had Tommy John Surgery.  Brian Wilson is working his way back to being a closer but he will close somewhere else in 2014 because the Dodgers have Kenley Jensen(younger and cheaper).  Wilson came back from two Tommy John surgeries and still looks good.  Motte is my man until his pitching proves otherwise.  It was bad luck for the Cards.  They signed him to a 3 year deal I believe and then lost his first full season.  He will need time(maybe more than the All Star Break) to be ready for the 9th and that is where you have Rosenthal.
*John Axford is waiting down there in the pen and basically being pushed to the side for the hot hand at the moment which is Carlos Martinez.  That is just fine.  Not sure if Ax returns next year.  Mujica is a free agent in 2014 and I don’t think the Cards bring him back due to their surplus of pitching.   Like Fernando Salas, Mujica will be commended for services rendered and get a closer job somewhere else.
*The sometimes forgotten man in the bullpen is Seth “Sorry I Don’t Throw 99 mph” Maness.  He has came in with runners on base and induced 17 double plays.   Forget his ERA and batting average against(he isn’t a starter and those are bulky inning load stats).  Just look at his inherited runners allowed to score.   Pretty damn sharp.   He doesn’t do well when he starts an inning.  He gives up a lot of singles but when he is called on to help the team escape a jam, Maness gets the job done.  Look at last night.  Ground ball in the hole and Kozma turns it and the Cards escape a threat.  Since his callup in June, that is what Maness has been doing.   He is just one of the many weapons down there.
*I am not worrying about the winter, offseason deals, or Carlos Beltran’s future in this city until we are cleaning up the parade off Clark Avenue in 2 weeks.  Forget it.  Forget offseason crap.  Focus on today and Greinke.  Friday with Kershaw and so on if needed.   All this team has is what it’s going after.   Right now it’s resisting the urge to flop and blow another 3-1 series lead.   One advantage.  The Dodgers had no clue how to solve Kelly, Wacha, or Wainwright without assistance from our defense.  Another one is unlike last year, the last two games are played at Busch and not on the road in San Francisco.  The advantage is ours and there is no momentum going the Dodgers way.  Only pain, as in Hanley Rameriz walking his bruised cracked ribs to the shortstop position today.  If we make it to the World Series, cancel the AL’s home field advantage because we may have Allen Craig as our DH.
Hope this helped answer some questions and theories.  Go Cards!
-DB
I still want Shane Robinson in there to start but he proved last night that our power surge may come from unlikely places.   Start Jay and sub in Shane later in center field and not for a hitter who nearly hit a baseball off the Hollywood sign last night in Holliday.   Two hits the past week from Holliday but two vital bombs that decided games.   The 2 run smash in Pittsburgh and the 2 run absolute bomb last night.
PHOTO CREDIT-WASHINGTON POST