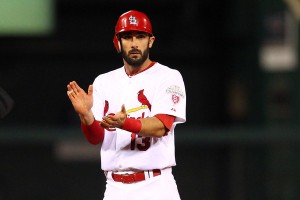 On Friday at Busch Stadium, Pittsburgh Pirates starter Gerrit Cole took the Cardinals to school for 6 innings.   Throwing 5 different pitches for strikes and having the ability to dial his fastball up to 99 mph, Cole kept our hitters off balance and could blow the heater past their bats.  The mid season addition to the Pirates staff and 1st round draft pick was pitching against the Cards for the first time and surely made an entrance.  Coupled with the collapse of the defense and Lance Lynn’s pitching ability, Cole flipped the momentum in the series over to the Pirates for the next two games.  After the Birds erupted for 9 runs in the first game, Cole shut them down and only allowed a solo home run to Yadi Molina.  That’s the narrative.  Here’s the question at the end of it.  Can the Cards adapt to Cole’s pitching or will they fall victim a second time?   Game 5 hangs on that question.

We all know Adam Wainwright will bring his A game and keep the game close for our lineup.   Waino is a veteran big game pitcher who can be hit early on but showed in September and last Thursday that the Pirates lineup doesn’t scare him that much.  However, if the bats can’t crack Cole, the evening could stretch into an uncomfortable affair.  The Pirates bullpen is just as willing as our young pen and their bats won’t make this game an easy out for the home team.  As much as Busch Stadium plays a part in the game, this game is decided by a ball and a bat and which jersey is more swift with those tools.   Waino will make it our game to lose but can we crack the safe of young gun Gerrit Cole?

Watching film will help but certain players need to step up and do what they do best.   The Cards hitters know how the man wants to attack them and have to be ready for that high octane fastball or his just as nasty changeup and slider.  The only difference in the lineup is Pete Kozma’s suddenly hot bat subbing in for Daniel Descalso at shortstop and in the 8 hole.

If I had to pick one man who could determine a breakout of this lineup tonight, it’s Matt Carpenter.  Since collecting his 199th hit against the Cubs on September 27th, the mesmerizing leadoff man has 1 hit since then and looks lost, adrift and out of rhythm at the plate.   This happened for a stretch in July as well.   Carpenter’s bat went cold and the offense went down right with his stick.   Where Carpenter goes, the rest of the lineup follows.  Simple leadoff man navigation.   I don’t care what he did during the regular season.   Doubles, hits, runs scored and all.   His only hit in this series is a scratch hit through the right side of the infield.   Carpenter is pulling his head out early at the plate and rolling over for weak grounders to second base or striking out on breaking pitches.   He isn’t working counts and not drawing walks.   It’s a bad time for the catalyst of your lineup to find a cold streak.   When he scores a run, the Cards are a great team.  When he doesn’t, the team is beatable.  Pitching does decide the fate of most games, but hitting is what wins you games.   At the core of this game, simplicity lurks.

Another person to remember is Molina.  He cranked a HR off Cole and was the only guy who took good swings against him in his at bats.   Expect him to be dangerous tonight.

For some reason, I expect one of the pitchers to get lit up tonight.   When a pitching duel is in the forecast, a romp is usually what arrives at the table.   Will the Pirates finally figure out Waino or will the Cards break through against Cole?  These are some of the great questions going into a winner take all game.   Which pitch decides the fate of a team’s entire season?   Which bullpen comes up big?   Each team has a deadly shutdown crew that has shown an ability to allow runs in this series?   Jason Grilli and Trevor Rosenthal have been great but Mark Melancon and Kevin Siegrist have been hit for key runs.

The hardest thing about tonight’s game is the evenness of the teams involved.   Each lineup has exploded in a game to win and used small ball to win a game.  Each pitcher has dominated the other lineup once in this series.  The hitters have shined and crashed to the ground.  Predicting sports is a field I have yet to break into and don’t really want to in the near future.   Let me just say this.  The lineup that executes tonight will be the team that moves on to the next round.   The pitchers carry the top billing in this game and the lineups have their work cut out for them.

Pitchers duel or offensive rampage?  After Michael Wacha’s dazzling postseason debut on Monday allowed the Cards to reach Game 5, they seem to have the momentum but Gerrit Cole stopped that party once in this series.   Can he do it again or will the Cards break his serve?

I love this game and I can’t wait for tonight.  The blood pressure will rise, the hands will tremble and the words in our head will gather up quick.  May the players feet be swift, their bats plentiful and their nerves clean and ready to roll.   Game 5 at Busch Stadium will leave no prisoners.

What team welcomes The Los Angeles Dodgers on Friday and what team packs their bags for the winter?   You never can tell.