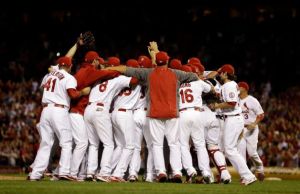 Let me just start by saying starting Jake Westbrook is a bad idea today.   It’s a “thanks for your services” giveaway from the Cards but it comes at a bad time.   In this day and age, I would think 9 million dollars for pitching half a season in 2013 would suffice but what do I know about sports politics.   The Cards control their fate today in the quest for home field advantage and Westbrook’s troubled right arm stands in the way.  Sitting at 96-35, one game ahead of the Braves and in the top spot in the NL ranks.   We aren’t just leading in run differential and RISP production.  Once again, the Cardinals sit atop the league with the best record.   Why give that away so Westbrook can feel better about his self esteem?   I would rather get ahead 6-0 first like the past 2 games this weekend over the Cubs and then insert Jake Westbrook.   He won’t be on the postseason roster, or at least he shouldn’t be.  If you have Carlos Martinez and Tyler Lyons in your pen, why do you need to give a highly important charitable spot to an aging vet with nothing to offer?   That question can fit into today’s dynamic.  Why give Westbrook a start against the Cubs(looking to spoil things in a different way) when a win could secure us home field advantage?  Westbrook has been horrible.  He doesn’t deserve anything from the Cards but a paycheck, and even that’s a stretch!

Let’s recap the last two days.   The Cards win the NL Central on Friday behind a solid outing from Lance Lynn and hits from Yadi Molina and Matt Holliday.   They win Saturday behind another fine start from Adam Wainwright and an early onslaught of key hits.   The Cards are playing great baseball.  This is the same Cubs team who gave the Pirates a stiff run for a win last weekend so don’t take them lightly.  One would expect the Cards from late July would have found a way to give away a win or two this week.   They have not and have the chance to finish the home stand in shut out fashion.   They swept a great Nationals team and can erase the Cubs today.   97 wins sounds pretty enough but its all the more tasty because of what it can secure.

The 2nd half of the season has found this Redbirds team to be dominant at home.   Far more shakier on the road than in their comfy confines of Busch Stadium, the Cards would be smart to make sure they play as many games under the Arch as possible.  We are 53-27 at home this season, as opposed to 43-38 at home.   We have a 3.13 ERA at home, as opposed to a 3.77 ERA away from home.   In the second half of the season, the Cards are 26-11 at home and most of the losses came in a dreadful 7 game home stand against the Dodgers and Cubs.   Look at how far we have come in 2 months.   In September, the Cards are 12-2 at Busch.   Teams don’t fare well here unless we turn into a deli and start giving games away like scraps of meat to the poor.   It’s is important for the Cards to not slow down today and maintain that cocky confident pace of play.

Do you want to play 4 of 7 at Pittsburgh or Atlanta?   I don’t think so.   Score as many games as you can where you thrive the most.   Plot out your safest trek during the biggest moments of the season.  Forget the regular season after today.  Every playoff team starts fresh in October.   This Thursday, all bets are off.  The Cards will have home field in their divisional series.  Let’s make sure we get it in the pennant as well before the AL home field takes over in the world series but may give the Cards an advantage if Allen Craig can swing a bat and run the bases.

Today’s game doesn’t look too important to the casual baseball fan but to the die hard it resembles air traffic control in a storm.  Navigate that plane into the right runway.  Set it up for success.  If I sound emotional right now, blame the sport.  Baseball brings out the romantic in me.  This is the greatest time of the year.  For the 10th time in the past 14 years, the Cards will be in the postseason.   For the first time since 2009, we own a division title.  Let’s not stop there.  Let’s win today, bring the Dodgers to Busch on Thursday and bring down the Cy Young Award winner in Clayton Kershaw for the third time this season.   I have a feeling about this Cardinals team.   One of those feelings that only comes around a few times per season.  We are playing great at the right time.  Too bad the playoffs don’t start until Thursday.  I recommend simulated games until then.   I am saying “we” so much because I consider myself a part of this team in some crazy way.  I am there, every game, every pitch, hanging on the result like an apple hangs from a twig before falling to the grass.

Let’s get greedy and win the finale and finish with 97 wins and home field advantage throughout the playoffs.   In other words let’s make Brian McCann lose his shit again!