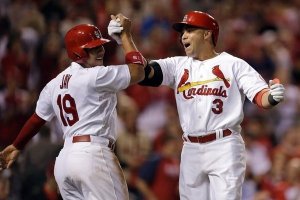 After last night’s gritty rousing take down of a hot team in the Washington Nationals, it was good to be a Cardinal fan.  With 5 games remaining, they are two games up on Pittsburgh and Cincinnati, who will duel with each other over the final weekend of the season and have guaranteed themselves a spot at least the wild card game.   Once deemed comedic, the NL Central now sports three playoff teams.   The Cardinals dispatched the Nats last night, 4-3, using every weapon in their arsenal.   Pitching, timely hitting and great bullpen work.  Let’s take a look at a few things that stand out heading into tonight’s battle and the rest of the week.

*Adam Wainwright, ladies and gentlemen.  Make that four brilliant outings since the Reds debacle.   Our ace has righted himself and after a rough first inning that hung on one bad curveball, Waino shut down the Nats for the next 6 plus innings.  It was impressive and satisfying to see our guy stop a red hot hitting team and send a message.   So many times in big series the past 2 months, Waino would falter in that series opening game.  Last night, he was dominant.   112 pitches, 5 strikeouts, 0 walks, 7 hits, and 3 runs.  Steady and productive.  If this is the last start he makes, what a statement.  He is 18-9 with a 3.01 ERA, 214 strikeouts and 236.1 innings pitched.  A true horse shows little doubt.  Waino walked only 34 batters all season and threw 5 complete games and 2 shutouts.   He won’t win the Cy Young but he reminded us in September why he is the ace of the present and future.

*Matt Carpenter.  It seems like every night he breaks a record.  Most doubles.  Most multi hit games, involving doubles, home runs and fine facial hair.  I kid but with this versatile player, it is easy to get swept up.  Carp has given so much to this team.   A fine defensive second baseman.   A great leadoff hitter.  A guy who is as good as Yadi Molina when working a 2 strike count.  He is hitting .324 with 197 hits and 124 runs.  He has 11 HR and 77 RBI.   With the 54 doubles, he also has 7 triples with an on base percentage at .397.   He borders on the ridiculous, which is why local commentator Dan McClaughin tosses praise at him like we toss water down our throats.    He is easy to like, humble, worked his ass off to get here and has turned in one of the most surprisingly productive season in Cardinals history.   The man deserves all the words directed his way.   Stay tuned.  His season isn’t over yet.

*Carlos Beltran came back from the dead last night and launched a game winning 2 run home run, his first in a month.  While his average has dropped to .298, Beltran still has 24 HR and 84 RBI to go with 162 hits.  Keep in mind he has also played in 141 games, a number no one prescribed in spring training but without Oscar Taveras looming, was given new realism last month.   Beltran’s health is always in play because of his sore knees.   He’s old but still capable of changing a game with one swing.

*The closer situation doesn’t scare me.  This team has gone with committees before and flunked out completely but something tells me this group is special.  I am normally against the committee idea.  I am old fashioned.  I like having one guy be the option and the stopper.   No negotiation.  However, I am all for a committee that includes the likes of Trevor Rosenthal, Kevin Siegrist and John Axford.  That is a deadly mix with raw talent and save experience.  They will work and there’s a good chance one will stand out and take the job.  What I don’t like is seeing Mike Matheny use two of them in the ninth inning last night.  Siegrist and Rosenthal combined to close the game and while I understand it’s a close 1 run battle,  I would like to only warm up one of them so the other is fresh for the next day.   Rosenthal has been on and off lately, while Siegrist has no experience closing and Axford was the best for a 2 year period.   However, some pitchers just go out and pitch and don’t think of the inning.   Here’s to hoping that is the idea with this group.

*It is important to note how strong of a club the recently eliminate Washington Nationals have.   Their lineup is full of imposing hitters like Jayson Werth, Ryan Zimmerman, Bryce Harper, Ian Desmond, and Adam LaRoche.  Their rotation is sharp and bullpen can’t be taken lightly.  They had a horrible two months to begin the season and dug a deep enough hole for the Braves to run away with the division.   Factor in the strong play of the NL Central teams and this Davey Johnson led crew is looking up at playing spoiler this week.

*As long as Joe Kelly doesn’t face the Brewers he will be decent.   The avenging formerly banished righthander was shelled again by the Brewers, allowing 6 runs(3 earned) and again using bad defensive skills to pour more gasoline on the fire.  I still think Kelly is aces and he has another start to prove so and one that could be vitally important on Saturday against the Cubs.

*Medical updates on Allen Craig bring a bad taste to my mouth.  The RBI machine who was injured in a first place accident on September 4th will get another x-ray on his foot.   This only tells me the club is confused about his lack of progress and re-analyzing his injury.  This can’t be good for his chances.   He has barely swung a bat or fielded a ball in the past 3 weeks.  The Cardinals are doing okay without him but seeing other big players go down and others become weary.   If Craig is in, Beltran gets more rest.   With him out, the other sluggers have to fill the void.  The updates on Craig remind me Scott Rolen and Mark Mulder.   At first, it wasn’t a fracture and he was put in a boot.   Weeks went by.  No progress.  Wrong strategy?  Bad luck? You don’t need a lab coat to figure out the Cards medical staff misses as many fastballs as Pete Kozma.  When will we see Craig play again?  He is too important to write off as pending.

*Matt Holliday is hurt again.  Every time the big guy goes on a streak, his back aches and sits him down.   He has missed two games due to back spasms.   With these kind of injuries, a return is hard to tell because the pain can linger or suddenly just vanish.    Due to other fragile areas of the lineup, Holliday’s status is vital.   If he can’t go, Shane Robinson is inserted into the lineup and the 6-9 spots in the order seem very ordinary.  Easy outs.  When Matt Holliday goes down, the Cards lack of outfield depth becomes very apparent.

*The injuries to Craig and Holliday will expose yet again a very weak Cards bench.  WIthout Adams on the bench lingering as a threat, all the opposing team will see are AAA able players with little experience winning clutch games.   Unlike Craig, who can be replaced with Adams, there is no easy replacement for Holliday.   Which makes the absence of a fresh young talent like Oscar so painfully visible.

The Cards are limping into the finish but they approach it as one of the strongest teams in the league.   Take a step back every once in a while and remember this.  The Cardinals have reached the playoffs 10 out of the past 14 seasons and gross 3.4 million souls a year in a small market.  We are a game back of the Braves for the best record in the NL and have dealt with the largest amount of starting player injuries in the majors.   Yet here we are.  5 games to go.  27 games over .500 and 2 games ahead in the division.   Every year, no matter if it’s Tony La Russa or Mike Matheny, with or without Albert Pujols, using 20 rookies or 5 rookies, the Cards find a way to compete.  They are always right there in September.  If Holliday and Craig can make recoveries, there isn’t a stronger club in the National League.  The Dodgers and Braves are beatable.  No team is invincible.  For the Cards, everything is at least possible.

Time is ticking away.  The regular season is nearly over.  Where will the Cardinals stand on Sunday?   Let’s hope a division series berth is in talks.